[T]he wisdom of the Narcissus myth does not convey any idea that Narcissus fell in love with anything he regarded as himself. Obviously he would have had very different feelings about the image had he known it was an extension of himself. It is, perhaps, indicative of the bias of our intensely technological and, therefore, narcotic culture that we have long interpreted the Narcissus story to mean that he fell in love with himself, that he imagined the reflection to be Narcissus!

I study things in parts, in close proximity to technics: I am a techno-fetishist and gadget breaker. I approximate Margareta Erdmann in Thomas Pynchon’s Gravity’s Rainbow (1973), because by combining gadget love and machine breaking, the emergent property will be one that crosses the easy distinctions that exist between renewable and non-renewable energy sources. I look at the medium-material in the ‘true Narcissus style of one hypnotised by the amputation and extension of my own being in a new technical form’ (McLuhan 12), but the hypnotism, the ‘Narcissus-narcosis’ (61) does not encompass ‘total field-awareness’ (52) – there remains a critical wakefulness in the numbed fortress of the mind.

This entry is about machine aesthetics, about light reflecting off matter: dreams of escape are propelled onwards by mechanical beauty. Functionality, as Fernand Lèger argues, is beautiful, but coldly so: the American painter Charles Sheeler’s (1883–1965) perspectives present beauty as a void. Objects stand in a vacuum, apparent on various levels: an emptiness of human presence as well as an absence of motion. ‘Suspended Power’ forms part of a series of paintings commissioned by Fortune magazine in 1938; published as a portfolio on the theme of ‘Power’, the painting, as the title indicates, captures the nature of this power as just that, suspended – not simply physically, hanging as it does, at the point of falling, but also metaphorically, a force whose temperament is not quite clear. The blade cuts an atomised figure in half; the rest of the bulk, typically accomplished in such a manner so as to erase evidence of human execution, totally recalls a ballistic missile, whose titanic warhead is freeze-framed just before it hits ground zero: classical landscapes of power arrest a world just before its meltdown and disappearance in light.

Charles Sheeler, Suspended Power, 1939 (Dallas Museum of Art)
Image source: framemuseums.org
Turbines, like rockets, belong as much to earth than to outer space, their rotations so clearly refer to the rhetoric of technological revolution. Static, they nonetheless embody dreams of flight; this tension between immobility and propulsive thrust is one of many paradoxes or ostensibly antithetical properties that are subsequently united into one form. To name but a few: their blades or wings touch the sky; they manifest a dream of function, of an alternative source of energy production that David Dickson calls ‘soft technology’, reducing environmental impact and forming an element in the rhetoric and aesthetic of a (white-washed) future. Aerodynamic considerations shape the design; it is easy, therefore, to link them to rocket and gantry, the blades to propellers, and to point out shared definitions and developments of mechanical parts like pods, or nacelles. The requirement for both lightness and strength merges steel with plastic: the steel tower, which burrows into deep intraterrestrial space – it rests on foundations which weigh around 750 tons – is outfitted with fibreglass blades, a lightweight synthetic material that allows them to bend into the wind. The lines are smooth, streamlined; the circular motions of the propeller-blades perform long sweeps, the graceful movements of a ballet mécanique. 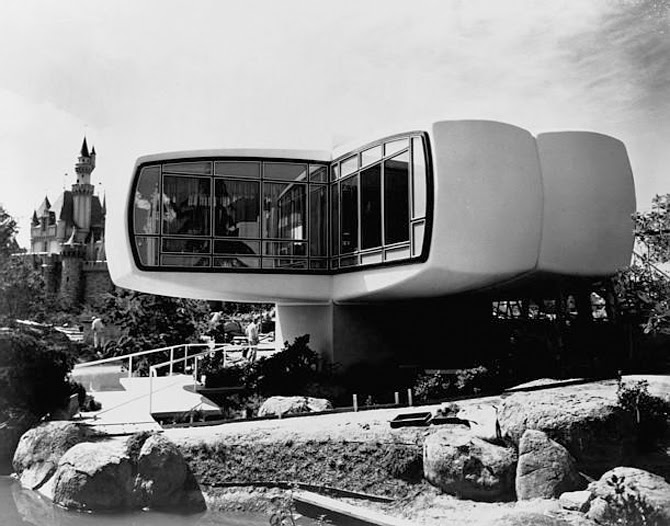 Fibreglass is a glass-reinforced polymer, whose plastic matrix can be both thermo-setting and thermo-plastic. Developed during World War II as a replacement to plywood in order to shield aircraft radomes and also used for communication purposes, including in water, gas, and sewage systems, fibreglass contains a reference to techno-dreamworlds by way of the Monsanto House of the Future, developed at MIT under the direction of Albert Dietz. The building – composed of a continuous surface of glass-reinforced polyester – is completed in 1957 and exhibited at Disneyland, where else, where it stands, for a period of ten years, as a reminder of plastic possibilities but in the end comes to stand for the material’s failures. By 1967, despite its promised flexibility, the House – to which, in theory, levels could be removed and added, re-arranged at will – is in fact permanent, fixed in time with respect to its formal appearance, its streamlined past, but also in relation to the difficulty with which it was finally dismantled. It does, then, store and relay impressions of the future, but of a particular kind, one of extraordinary technological promise that does not come to pass or passes too quickly, revealing the fundamental flaws of its design. It does, as so many technologies do, go ballistic – linked, obviously or insidiously, to military purposes and to the manufacture or trajectories of ICBMs, but also in terms of its return to earth: after its soaring flight of fancy, it must crash back down.

Wind turbine blades (also composed of wood, therefore forming an interface between the organic and inorganic) retain a plastic legacy, the myth of a ‘soft technology’, and of a wasteless world. They are dismantled easily, unlike the Monsanto House of the Future, while they still carry the high sheen of technological euphoria. The narrative of extraction – from a carbon, entropy-inducing economy, however tenuous this process still is at the minute – has to be accompanied by a reflection on ‘needs’, a word in quotation marks, because it is contentious, the ‘need’ for unlimited supply of energy on a limited planet, a rhetoric which shifts as new discoveries are made: more electricity to produce more plastic cups or plastic wings. Jacques Ellul, in his book on The Technological Society (1954), writes that: ‘Doubtless, technique has its limits, but when it has reached these limits, will anything exist outside them?’ (85), a pertinent question about a closed world, gadgets fitting into existing networks, the circulatory apparatus of a regime where, as Mirko Zardini observes, in ‘(Against) the Greenwashing of Architecture’, renewable energy sources ‘fit in neatly between coffee without caffeine and war without warfare’ (146) and where words like freedom, as Esther Leslie concluded at a Luddite conference at Birkbeck in May, transform into military manoeuvres, into Operation Freedom. ‘Soft technology’, for the main part, hides its adherence to a system of rapacious energy consumption and fails to challenge the ‘need’ and blood thirst upon which the network, Vampire Electric, thrives: turbines, too, propel onwards technological somnambulism.

Fabienne Collignon is particularly interested in American techno-culture and machine aesthetics; her work to date focuses mainly on Cold War dream weapons and their implantations in the land. She has recently also worked on narratives of plastic utopia; the insidious Cold War appropriation of Antarctica; the linkage between electricity and vampirism. She currently teaches and lectures at the University of Glasgow. This short essay emerges out of postdoctoral research conducted at the Institute for Advanced Studies in the Humanities (IASH) at the University of Edinburgh.