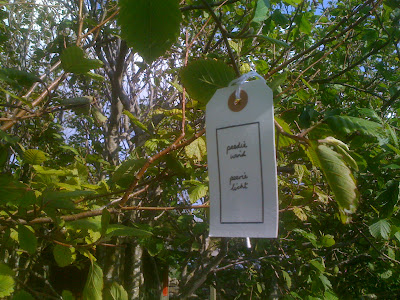 This is our first day together – Alistair Peebles, Laura Watts, Alec Finlay: we could be the newly formed Archaeological Survey for Renewable Energy, A.S.R.E., but better by far to be pals out for a walk. We meet upstairs in the Stromness Hotel to outline some common aims from out of our different projects. 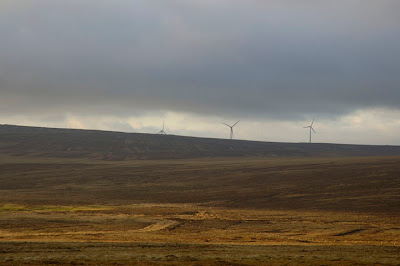 For Alistair this is an ongoing attempt to understand his own coming to and dwelling on Orkney, and his interest in the ingenuity of island technology. 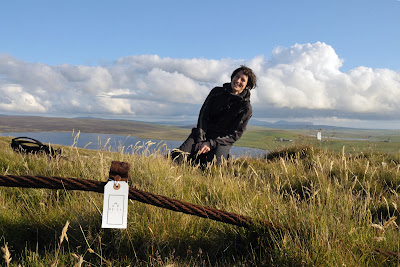 Laura is an anthropologist and archaeologist of the contemporary. Although she preserves her status as a welcome visitor, she’s no stranger here; her manner is not that of the detached observer. Laura’s embedded, and for her the islands are comforting and familiar. They are also a locus in which to imaginatively analyse the span of technology over five millenia. 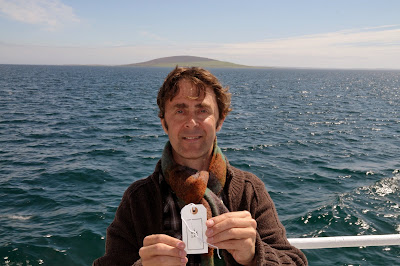 I’m a traveller, and I bring my interest in art and poem as aids to viewing to the islands, partly as a way to continue the things I learned to love on the road north.

These blogs will combine a number of flexible forms, and evolve new ones. They include photographs, sketches, and the 'tanzaku' poem-labels that I adopted on the road north. Some of these labels have short poem sketches, others are WORD-MNTN, relating to the various small hills of Orkney. 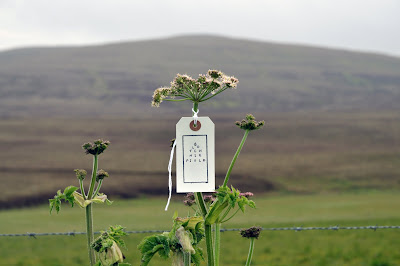 Many of the journeys I will make seek conspectus: places where the landscape settles into aligned meanings. I’ve no expertise in any one of the stratified skills associated with these types of knowledge – archaeology, geography, geology, anthropology – and each text is a confluence of indoor and outdoor reading, listening and chatting to folk, and poeming. Out of this informal wandering practice a series of more formal artworks will emerge, whether in the form of poems or objects. Many of them will be collaborative.

By the time the three of us have sketched the myriad themes that Orcadia and renewables suggest, and found some of their intersections, the broad band of morning rain has passed over. ‘Da wedder’ is turning to the better, and that golden ball is the sun. 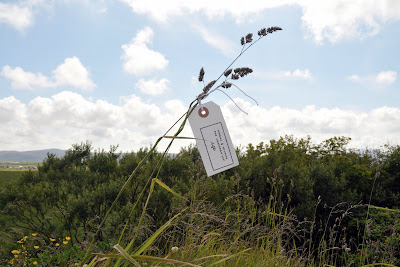 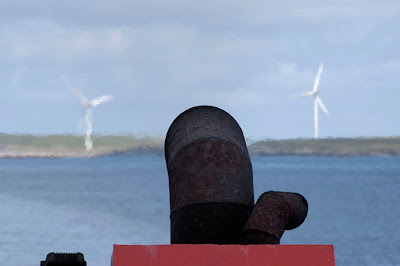 A visit to Orkney is an encounter with a number of island demesne, each of a rich complexity. Being both discrete and complete, this outset culture cannot help but suggest a way, or ways, of life.

culture
is at its richest
when there is

the greatest ratio
of coast
to land 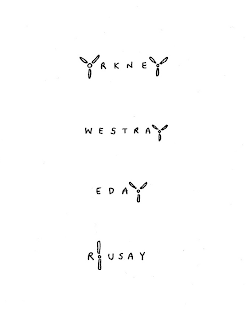 Being both discrete and complete, this outset culture cannot help but suggest a way, or ways, of life. 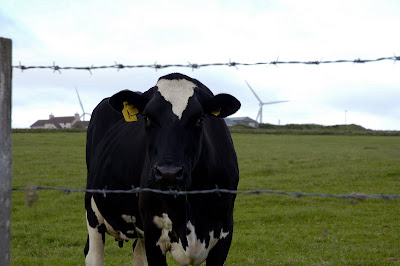 The islands balance wild nature with industry; fishing and farming with innovative engineering. Ancient Neolithic remains are to be found by the everyday road; walking among those stones one sees the silage wagon, a Nissan hut left over from wartime, and a distant wind-turbine.

A mosaic of eras then.

The idyllic beauty of Orcadia is not sequestered from the reality of Mainland – or indeed island – ambition, but it may, sometimes, temper this with a blend of island pragmatism and ingenuity.

At its best, Orkney takes its geography as a symbolic duty, seeking ways to be a place that sees and lives in the round.

To make a crude but perhaps necessary comparison, Orkney differs from the Western Isles in being a culture with a less catastrophic relation with time. It may sometimes clothe itself in a Norse identity, referring, for instance, to George Mackay Brown's imagination of these islands. But that Norse inflected mentality has not affected the success of its beef farmers to take advantage of good land, or the willingness of Stromness and Kirkwall to identify with a rapidly evolving new knowledge based economy such as renewable energy.

Take a tour around Skye, which is rich in Neolithic and Norse remains, and one sees few if any signposts. Drive around Orkney and there are brown-age signposts helpfully placed at regular intervals. The past is configured into the present in an entirely different way in these two island cultures. Of course, some will argue there are levels of awareness that reach beyond the brown signpost and what little text fits on a Historic Scotland plaque, but the folk here know and share their inheritance.

Gaelic culture is no doubt consumed by the struggle to preserve a remnant language, but aren't names themselves, especially the names of ancient places, an encouragement to walk towards the rich vocabulary of the folk who live in these places?

As with any island, Orkney constructs ways of life around localism; non-localism is simply the act of leaving, which is called migration. 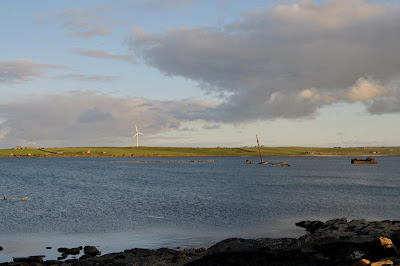 If Orkney has become a pioneer in terms of renewables, from time to time it is also asking itself: as a community, have we the cultural intelligence to define a limit to those new concerns? How prevent an island becoming a colony of wind factories, a pin-stuck porcupine? Where economic gain covers the landscape with verticals, making it into a series of installations. The next few years will tell.

There is no ‘Ting’ on Orkney, there is only conversation and unsaid understanding. Negotiations are always ongoing.

One block on development is the historical landscape, but rather than monuments themselves, perhaps one could try to recover and learn from the perception of that landscape, the seeing of the place through ancient eyes, which may inform us of new ways to configure past, present and future. 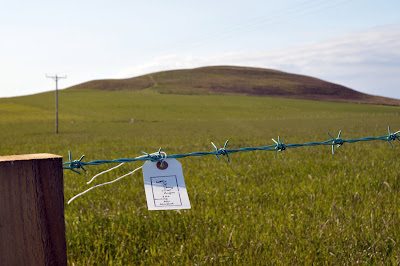 Costa Head, site of the first large-scale windmill turbine in the British Isles is one marker where past and present overlaps. The site, or sight, is a reminder that towers don’t stand forever. And the arrival of the platform that will secure the Oyster II wave power units at Billia Croo points to the future – one that will affect on and off-island folk. 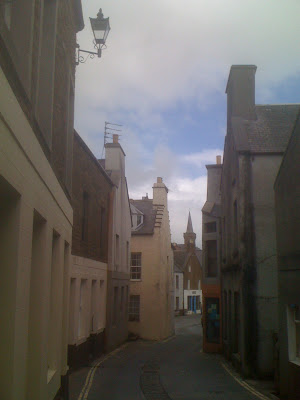 Stromness
Alec Finlay, 2011
But I am only a visitor here; neither expert, nor Orcadian. It’s a place I’m fond of, and one where I have friends. I’m hardly unique in thinking Stromness by far the finest and most cultured small town in the British Isles.

My week-long stay circles around Alistair and Carol Peebles home at Buckquoy, where the garden gathers itself around a stone protected circus of thrift and low trees. Shelter, that’s the thing, always capitalized on Orkney. Shelter that allows us to chat while the butterflies enjoy their open-winged bathe on stone in evening sun. 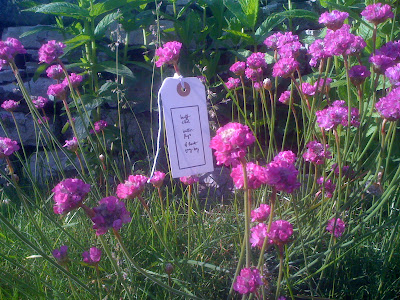 These then, are the blogs from the Orkney trip, June 2011: Costa Head, Burgar Hill, Rousay & BIllia Croo, 'runehorizons'.

Laura Watts:  8 Key Components In a Future Infrastructure For the Orkney Islands