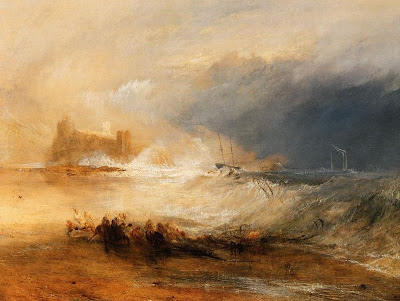 What is it about our weather that makes it a suitable subject for art and music just as much today as in the past? It appeals both to the scientist wanting to understand and predict the weather and climate just as much as to the artist wanting to represent it in some direct or indirect way.

Thoreau, the famous American environmentalist and philosopher, wrote in 1854:


It is something to be able to paint a particular picture, or to carve a statue and so to make a few objects beautiful; but it is far more glorious to carve and paint the very atmosphere and medium through which we look ... to affect the quality of the day, that is the highest of arts. (Thoreau: Waldon 1, p61)

Turner, in one of his lectures to students at the Royal Academy in 1811, placed great emphasis on studying our changeable British weather:

What seems one day to be governed by one cause is destroyed the next by a different atmosphere. In our variable climate where all the seasons are recognisable in one day, where all the vapoury turbulence involves the face of things, where nature seems to sport in all her dignity and dispensing incidents for the artist’s study …how happily is the landscape painter situated, how roused by every change in nature in every moment, that allows no languor even in her effects which she places before him, and demands most peremptorily every moment his admiration and investigation, to store his mind with every change of time and place. (Wilton 1979: The Life and Work of JMW Turner, p107) 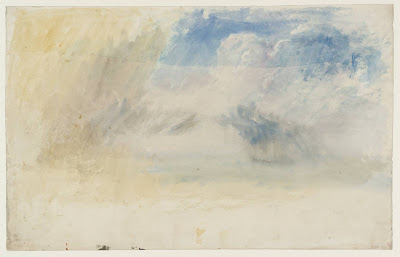 Turner loved the chaotic and unpredictable ceaseless change that our weather brings to otherwise fixed, unchanging landscapes. The weather brings our landscape to life and weather paints an unceasing array of infinite cloud form on our blue sky canvas.

However Luke Howard had already recognised, in his lecture to the Askesian Society in 1803, that:

If clouds were the mere result of the condensation of vapour in the masses of the atmosphere which they occupy, if their variations were produced by movements in the atmosphere alone, then indeed might the study of them be deemed a useless pursuit of shadows, an attempt to describe forms which, being the sport of winds, might be ever varying, and therefore not to be defined. However the case is not so with clouds. They are subject to certain distinct modifications, produced by the general causes which affect all the variations of the atmosphere; they are commonly as good visible indicators of the operation of these causes, as is the countenance of the state of a person’s mind or body. (Quoted in Thornes 1999: John Constable’s Skies, p36)

Luke Howard went on to outline his Latin cloud classification (stratus, cumulus, cirrus etc) which showed that our weather is not totally chaotic and indeed our weather is constrained by climate into regular seasons. No two clouds will ever be identical but they take on a recognisable form. 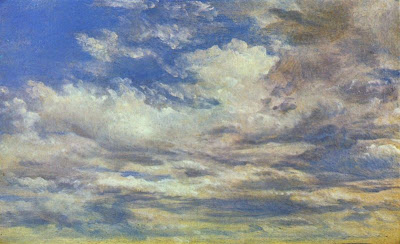 One of Constable's 'skying' cloud-studies

Constable was familiar with Luke Howard’s cloud classification and it was Constable’s willingness to invest time in understanding contemporary meteorological theory as well as in sketching the sky, out in the open air, that enabled him to paint ‘sky moments’ that we can all recognise and identify with.

I have often been advised to consider my skey – as a white sheet drawn behind the objects – Cirtainly if the skey is obtrusive (as mine are) it is bad. But if they are evaded (as mine are not) it is worse. They must stand and always shall with me make an effectual part of the composition. It will be difficult to name a class of landscape – in which the skeys is not the “keynote” – the standard of “Scale” – and the chief “Organ of Sentiment”. The skey is the source of light in nature – and governs everything. (Quoted in Thornes: ibid, p280; taken from original 1821 letter)

Barbara Novak sums it up perfectly:

The sky is a finely tuned paradigm of the alliance between art and science. In that mutable void, the landscape artist’s concerns – poetic, ideal and symbolic, empirical and scientific – are sharpened rather than blurred. As the source of light, spiritual as well as secular, the sky relieves absolutism with infinite moods, unchanging ideals with endless process. No wonder artists fix their particular attention on those moist cargoes that describe the void in brief but repeated compositions: clouds. (Adapted from Novak 1980: Nature and Culture, p78) 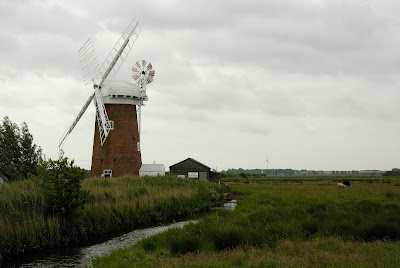 We are born into the air and our senses have developed to live as part the atmosphere - through the air that we breathe and the core temperature of 37 degrees Celsius that we maintain. On average we breathe about 15m3 of air each day. Each m3 of air weighs 1.23kg which gives us a daily intake of nearly 18.5kg, equating to about 7 tonnes of air per year. Without air we would all perish in a few minutes. (The world record for holding one’s breath on land is just under 10 minutes (just under 20 minutes under water) but the rest of the world’s population would be brain dead by then! On average, with each breath, we breathe in and share at least one molecule of Caesar’s last breath!)

As I contemplate the blue of the sky … I abandon myself to it and plunge into this mystery, I am the sky itself as it is drawn together and unified, and as it begins to exist for itself; my consciousness is saturated with this limitless blue…  (Merleau-Ponty, Quoted in Ingold 2011: Being Alive, p129)

Tim Ingold goes on to state:

Unfortunately, because we have been in such intimate touch with the atmosphere and the sky - throughout evolution - we automatically take it for granted. We need to rediscover and protect the wonderful, free and natural services the atmosphere provides for us all.

John Thornes is Professor of Applied Meteorology at the University of Birmingham, whose main research focus is the atmosphere and the dialectic between the atmosphere and society, for which he has developed three main areas of inter-related research in the fields of transport meteorology, landscape meteorology and the commodification of the atmosphere. Published work includes 'A Rough Guide to Environmental Art' (2008) and John Constable's Skies (1999). In the course of his research Thornes has produced a table of the relative values of atmospheric services (John Thornes et al, 2010).