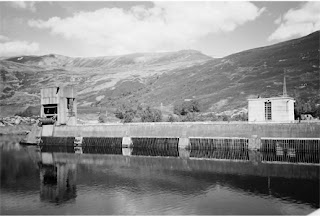 When you climb a hill, you often hear water without seeing it. The run of tight rills – rainwater collected and spilt by the smallest of hill top lochans – is hidden. A comb of fine grasses bridge the channel and all that remains is the high-pitched, faintly ceramic noise of water moving quickly over stone. 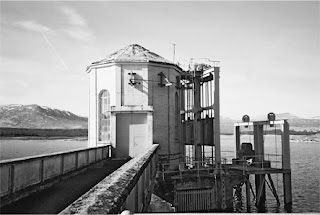 The ability to read water, to understand the prompts of pigment, light and shade - the topographies of potential - comes with time, with walking slowly and often in the hills. This is the small water that leads to the big water: the lochs and fjords that tether the landscapes of Northern and Western Scotland to the ground. Great grey basins of freshwater, spring water, rainwater and run off. In the United Kingdom, 90% of water mass and 70% of water surface resides in Scotland. Ours is a watery landscape. 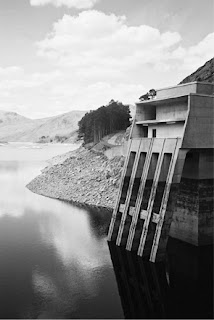 The engineer in Jack Chambers’ 1943 Ministry of Information film ‘Power for the Highlands’ can ‘read’ water. Standing on the rise of a hill he invokes the massive waterscape that would become the North of Scotland Hydro-Electricity Board Development Scheme, the Hydro.

Now, as one moves through the Highland landscape the view is peopled by the architectures of water: dams and power stations, reservoirs and surge tanks, aqueducts and intakes. And over time they have lost much of the formal violence that marked them out as other than the hills and lochs they calibrated. Villages were dismantled and flooded, people were displaced. 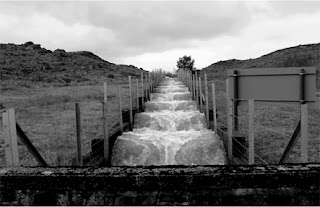 The demographic of the Highlands was radically altered by the temporary influx of labour moving between schemes over twenty years of intensive construction. People settled, had families and went on to work in the structures they had built. Now their children are retiring from the same industry. Refined and winnowed by economy and technology, the crowd of Hydro workers has diminished and one person and one set of buttons can manage a catchment. 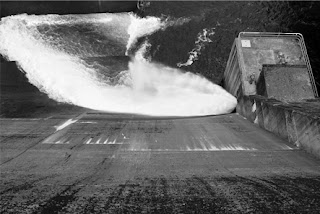 My point is one of time and scale. Over time, the edges of infrastructure and nature – concrete and stone – have blurred. Moss and lichen have colonised and the arid bleach of fresh concrete has been replaced by something more seductive, a dun to verdigris peppered by the violent greens of Dwarf bladder-moss and the burnt sienna of Red leska. The architectures of the Hydro have reached a point of belonging where the form and its narratives cannot be dismantled. What we see is simply the most extreme expression of a human landscape. To a greater or lesser degree we – as a species - cultivate, cut and change, we destroy and we build. 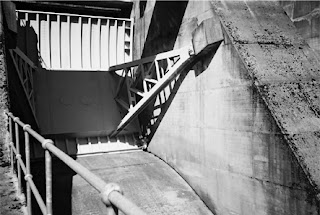 The scale of change with the Hydro is just conceivable – with maps. That is the scale of dominance, the meta-drawing that pulls water from myriad catchments, channels, curates and generates power. Another scale, the minute, points to another landscape, the human microclimate. At the edge of aqueducts – at the point of intake – in the littoral zone between high and low tide in a reservoir, on the wall of surge tanks, at the base of a slipway - there are gardens: fine carpets of lichen, moss and fern. An increase of moonwort – a ridiculously miniscule fern – by the Strathfarrar Scheme and a hoped for increase in the Slender Naiad or Nodding Waternymph in the lime-leached, slow moving waters of the Northern Reservoirs. 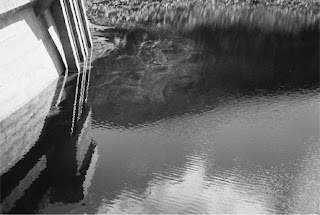 Whilst the scale of awe carries with it a certain disgruntlement and sometimes horror at the impact of architecture at an industrial scale, wonder offers an alternative: delight in the fallout, the unplanned and unmanaged that prospers – undisturbed – at the foot of the Cathedral.

The water archive began in 2000. It is a continuous project, an ongoing photowork documenting Hydro infrastructure across Scotland. The archive takes the form of a Top Trumps set, playing cards measuring 75 x 110 mm. At time of writing there are 326 cards and counting.